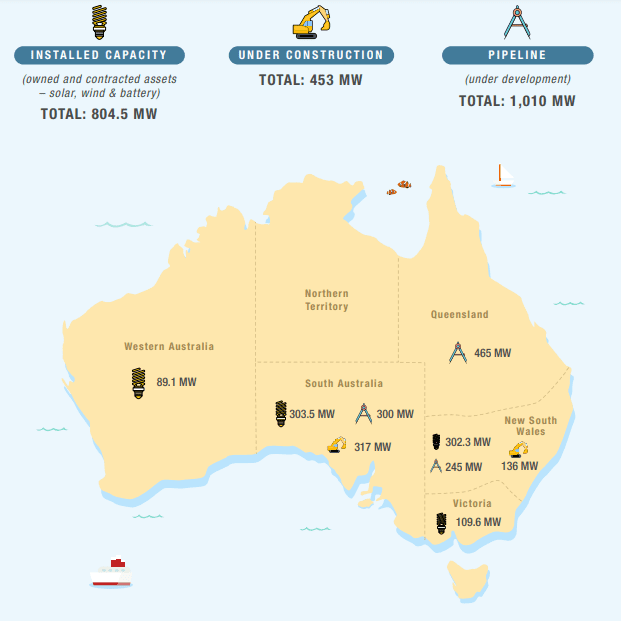 Iberdrola group becomes one of the leaders in the Australian renewable energy market after acquiring Infigen Energy. Thanks to this operation, the company now operates more than 800 MW of solar, wind and storage batteries in the country and has a significant portfolio of projects, of which 453 MW are under construction and more than 1,000 are in various stages of development.

As part of its strategy against climate change, Iberdrola continues to consolidate its position as the world’s largest renewable energy company, adding new projects to its portfolio. Along this context, it successfully completed in record time a friendly takeover bid for the Australian renewables company Infigen Energy, an operation that reinforces its entry into this new priority market, in which it has already begun the construction of its first renewable development: the 317 megawatt (MW) Port Augusta wind-solar hybrid project.

This is the eighth corporate operation carried out by the group led by Ignacio Galán so far this year, which has committed to making record investments of 10 billion in 2020 to continue reaffirming its world leadership position in the field of renewable energies.

Infigen has seven operational wind farms totalling over 670 MW, as well as a wind and solar project portfolio of 1,000 MW. The company also has another 560 MW in operation through various proprietary, leased and capital-lite assets, which includes the power obtained through four PPAs (245 MW) and energy storage batteries (75 MW). Those 75 MW include the 25 from the battery which it already manages in the Lake Bonney wind farm in Southern Australia and a further 50 which it is to operate in the Wallgrove substation in New South Wales, through an agreement signed with the local distributor TransGrid [PDF]External link, opens in new window..

Iberdrola has just begun construction on the Port Augusta complex in South Australia, its first solar-wind hybrid plant in the world. It is a renewable facility which will combine a wind farm with an installed capacity of 210 MW and a 107 MW photovoltaic plant and, once in operation, it will generate enough clean energy to power the equivalent of 180,000 Australian homes per year.

This project, together with those of Infigen, will make Iberdrola the market leader in the South Australian region in terms of installed capacity, with almost 1,000 MW. The purchase of the Australian company will also make it possible to sell the power produced by Port Augusta to industrial clients in the country.

The complex will involve an investment of 500 million Australian dollars and could be operational by 2021. During its construction phase, approximately 200 jobs will be created and, once it is up and running, it will employ about 20 people. It will involve global, Australian and Spanish suppliers and is already contributing to the revitalization of industry.

Ignacio Galán was very positive about the purchase of Infigen and stated that, “with our experience as a world leader in clean energy and Infigen’s talent and knowledge of the Australian market, we are prepared to successfully deal with the future growth of renewable energy in the country, which has very good prospects.”

Renewable energy in Australia continues to increase its market share and is expected to accelerate its growth over the next 10 years. According to the Australian government’s latest Energy Report, 21 % of the country’s total electricity production will come from renewable sources by 2019, with solar production increasing by 46 % and wind production by 19 %.

By 2030, emissions from the power sector in Australia are projected to fall by 23 % and the share of renewable energy in the generation mix are projected to reach 48 %. This favourable outlook is based on plans to upgrade the country’s transmission and distribution network, as well as to reduce the cost of storage technologies.