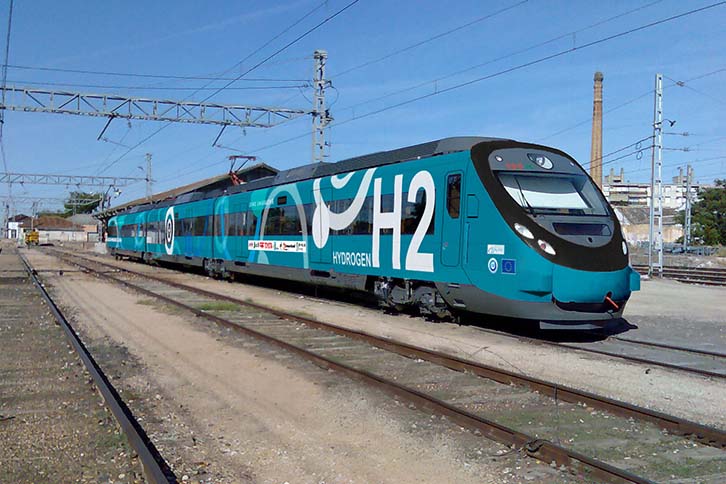 CAF and Iberdrola have concluded a framework agreement with the focus being global promotion of green hydrogen, emission-free rail transport.

The CAF Group (Construcciones y Auxiliar de Ferrocarriles) has partnered with Iberdrola to promote the use of green hydrogen in the railway sector and for passenger transport. The agreement was signed between Iosu Ibarbia, CAF’s Technology Manager, and Millán García-Tola, the Green Hydrogen Manager of the utility company.

For Millán-García Tola, Iberdrola’s Global Director for Green Hydrogen, “This partnership further bolsters Iberdrola’s commitment to decarbonising transport that is hardly electrifiable. By partnering with CAF, a leading player in sustainable transport, we intend to continue providing solutions that will serve as a catalyst for the transition to zero-emission transport. Both companies complement each other perfectly, and together we will be able to deliver comprehensive solutions for transport electrification, a sector that contributes to a third of EU greenhouse gas emissions.”

“CAF has long been strong advocate for developing its own technologies for power electronics, energy storage and batteries, and more recently hydrogen. We believe that this partnership agreement with Iberdrola is another step towards furthering this commitment and will contribute significantly to achieving the decarbonisation goals in the transport sector”, observes Iosu Ibarbia, the CAF Group Technology Manager, commenting on the agreement entered into between the two companies.

Trains will be greener than ever

It is currently difficult to electrify certain sections of railway lines on which fossil fuel-powered trains are used. The goal of this partnership is to promote comprehensive solutions by which to replace these trains without having to install catenaries or make and significant modifications. Another goal is to improve the renewable hydrogen value chain with the highest safety, technology and competition standards in fields like the railway sector and passenger transport, helping to encourage local companies to develop their technology and production capacity so as to drive sector transformation in Spain and compete on the international market. Tests are due to start in April this year for the new train CAF has developed at its Zaragoza plant as part of the FCH2RAIL project. These trains will be powered by green hydrogen supplied by IBERDROLA from its Barcelona plant.

Headed up by CAF, the project is already well underway in terms of the design and production of a hydrogen train prototype which, based on a RENFE Civia series commuter train, will be fitted with a new electric generator system based on the hybridization of hydrogen fuel cells and batteries, will combine with the vehicle existing traction system to become one of the first railway showcases for hydrogen Cell dual energy mode systems.

The hydrogen plant that will power barcelona’s transport system

Iberdrola, the leading developer of green hydrogen, already has two operational production plants in Spain. The green hydrogen used for this pilot project will be supplied from Iberdrola’s new Barcelona plant, which was set into operation at the beginning of 2022. This IBERDROLA-owned hydrogen plant is in Barcelona’s Free Trade Zone, near the city’s airport and has been supplying green hydrogen for TMB buses since January 2022, being the first commercial and renewable hydrogen plant in Spain. This plant forms part of Iberdrola’s Green Hydrogen strategy, which includes other projects such as a partnership with Fertiberia in Puertollano, as well as the recently announced Puerta de Europa Green Hydrogen Cluster in Andalusia, which involves over 80 companies.

SICE awarded its first Rail project in the ANZ region